Every mother has felt like she’s a total failure at some point in her life—probably at countless points in her life. The pressure to be all things to all people is overwhelming, as is the feeling of guilt that you’re constantly letting someone down: your kids, your significant other, your fellow moms, your boss, yourself.

“Bad Moms” nails that universal sensation—surprisingly, it was written by two men, directors Jon Lucas and Scott Moore—but it balances its nuggets of truth with hilariously raunchy humor. The idea of friends liberating themselves through completely inappropriate behavior is something Lucas and Moore know a little something about: They wrote the first “The Hangover” movie and wrote and directed the 2013 college romp “21 & Over” (which I liked vaguely better than most critics). Here, they reveal a surprising knack for real-world insight while still giving us slo-mo party montages of women drunkenly raiding the grocery store, bouncing up and down while chugging from vodka bottles and making out with each other to thumping dance music.

It’s a tricky combination to pull off, and Lucas and Moore do run into some slightly awkward tonal shifts in the more dramatic scenes. But in the pantheon of “Bad” movies—“Bad Santa,” “Bad Teacher,” “Bad Grandpa”—this one’s actually pretty good. For the film to be about more than just wildly outrageous behavior (although those moments are the one that provoke the biggest and well-earned laughs), these have to feel like real people and we have to care about them too. And we do, thanks to a strong cast of comic actresses who have an easy chemistry with each other.

Mila Kunis stars as Amy, a wife and mother of two living in suburban Chicago. She’s a young mom who got pregnant at 20 and married her high school sweetheart (David Walton). (He’s a bit of a one-dimensional dolt; then again, so are most of the men in this movie, and maybe that’s the point). Now in her early 30s, she feels constantly harried as she juggles a part-time job and two kids (Oona Laurence and Emjay Anthony) without much help from her husband. Plus, she’s the one who does all the grocery shopping, makes the breakfasts and lunches and drives the kids to their various classes, practices and games, not to mention her PTA responsibilities. She jokes sardonically that the one thing she’s good at is being late all the time, but there’s an honesty in that statement that cuts to the core.

On a day when everything goes wrong at once, Amy snaps and decides she’s tired of trying to be the perfect parent. She’s going to be … wait for it … a Bad Mom. The judgy moms who run the school are appalled at the very idea of not trying anymore, led by Christina Applegate as the tyrannical PTA president, Gwendolyn. Applegate brings just the right amount of icy, catty cool to the role, plus she gets to revisit her Veronica Corningstone hair from the “Anchorman” movies. Despite the extremes to which Gwendolyn eventually goes, though, there’s a fundamental realism to this figure, too. These people exist; I know whereof I speak, having been the room parent for my son’s class the past three years in a row.

But Amy finds unlikely allies in two other mothers who also are ready to stop struggling to hold it all together. She has a boozy bonding session at a neighborhood bar with Kiki (Kristen Bell, enjoying a “Forgetting Sarah Marshall” reunion with Kunis), a nerdy, needy mother of four whose coldly controlling husband demands that she do everything around the house; and Carla (Kathryn Hahn), the brazen single mom of a sweetly oafish baseball player who has no other friends because of her unapologetically profane and promiscuous ways.

There’s a great energy between all three of these actresses, who bring such different personalities to the screen. And what a joy it is to see a movie about that sort of friendship in the middle of male-dominated summer blockbuster season, just two weeks after the all-women “Ghostbusters” remake. If we’re continuing to draw comparisons between the two, Hahn functions as the Kate McKinnon figure—gloriously unpredictable, game for anything and impossible to stop watching. Going to weird, dark places has always been her forte, but “Bad Moms” gives Hahn a chance to indulge in some next-level stuff—and yet, there’s a loyalty and a decency to Carla that round her out nicely.

While we’re on the subject of female-driven comedies, though, “Bad Moms” also has more than a hint of “Nine to Five” about it—a huge compliment from me, given that it was a childhood favorite of mine. Not unlike Jane Fonda, Lily Tomlin and Dolly Parton in that groundbreaking 1980 film, Kunis, Bell and Hahn play three women from disparate backgrounds who come together to overthrow a bully and upend the system. Their answer is to have Amy run against Gwendolyn for PTA president, which leads to the aforementioned wild party (with an inspired and very funny celebrity cameo).

Even when things soften and turn sweet toward the end—including an unexpectedly emotional segment during the closing credits that I will not spoil for you—“Bad Moms” retains an appealing wrongness. Maybe moms can indeed have everything after all. 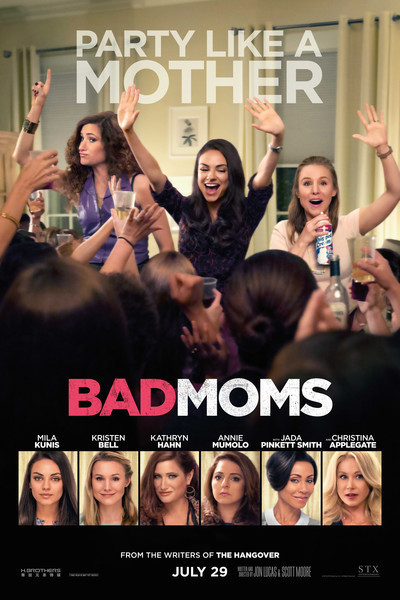 Producer's Corner: Ellis Goodman's Louder Than a Bomb, Mulberry Child and Art Paul of Playboy: The Man Behind the Bunny Now Available on Prime Video