The Chicago International Film Festival is more than just an occasion for one of the largest and longest running North American fests to display its latest discoveries. It's also an event where audiences and jury members alike dive into a pool of endless cinematic ideas and leave with some unexpected favorites. (To see some of ours, all of our CIFF 2016 coverage can be found here.)

The festival started on October 13 with a screening of Damien Chazelle's widely-adored "La La Land," which brought Chazelle back to the city along with supporting actress Rosemarie Dewitt (who shared that it was her first time in Chicago). The two spoke at a pre-screening cocktail reception and then introduced a screening on the film, setting a strong precedent for the quality that was to come, projects made around the world by many filmmakers due to receive a warm Chicago movie-lover response.

Throughout its two weeks the festival's schedule has been loaded with filmmaker appearances and important events, whether presentations about huge film personalities like Geraldine Chaplin, honored in a tribute on October 15, or a conversation with "12 Years a Slave" director Steve McQueen on October 22. Director Peter Bogdanovich came to the festival on October 16 to receive a tribute, and then presented a screening the next day of his 1981 film, "They All Laughed." Danny Glover accepted the Visionary Award on October 20 while also in town to promote his new film, the Nigerian Ebola drama "93 Days." On Sunday, October 23, Taraji P. Henson joined the festival to discuss her latest project, the heavily anticipated "Hidden Figures" in a conversation with Regina Taylor. That same day, director Julie Dash appeared at the festival to present a new restoration of her 1991 film, "Daughters of the Dust."

A great facet of CIFF is that it runs full speed until the very end. Tonight even features a screening of the highly-acclaimed drama "Moonlight," with director Barry Jenkins, writer Tarell Alvin McCraney and stars Andre Holland and Naomie Harris scheduled to attend. And of course, there's the "Best of the Fest" line-up, shared below, to see award winners before the festival wraps up. The festival will end on a fittingly big note tomorrow night with a closing ceremony screening of "Arrival," the new sci-fi drama from director Denis Villeneuve that features a highly-acclaimed performance by Amy Adams.

For a festival with numerous essential events, the awards ceremony on October 22 was certainly a potent designation of the strong narratives and documentaries, features and shorts that the occasion had to offer.

The International Competition Jury included filmmakers and actors from around the world, as led by Geraldine Chaplin. Their pick for the Gold Hugo was family drama "Sieranevada" by Cristi Puiu [pictured above], who gave back to the festival with a hilarious acceptance video that featured him sitting, mostly in silence, sometimes ruminating on whether he should continue directing or take up painting. It was a perfect blend of dry comedy and full character that, along with the Best Director award given to Puiu, made "Sieranevada" shoot to the top of my must-see list. ["Sieranevada" screens one more time on Thursday, October 27 at 7:45pm. To order your tickets, click here.]

A Silver Hugo Special Jury Prize was given to Asghar Farhadi's "The Salesman," while other films were recognized for their achievement in specific categories. Adrian Titieni received the Best Actor award for writer/director Cristian Mungiu's "Graduation," while Rebecca Hall was given the Best Actress designation for her work as Christine Chubbuck in Antonio Campos' new film, "Christine." Mungiu himself won the Best Screenplay honor for "Graduation." Recognition for Best Cinematography and Best Art Direction went to "The Last Family," a particular favorite of the jury and one that had them specifically staying for the Q&A to see from director Jan P. Matuszyński how he pulled off making the film. ["The Salesman" screens one more time on Wednesday, October 26 at 5:30pm. To order your tickets, click here.] 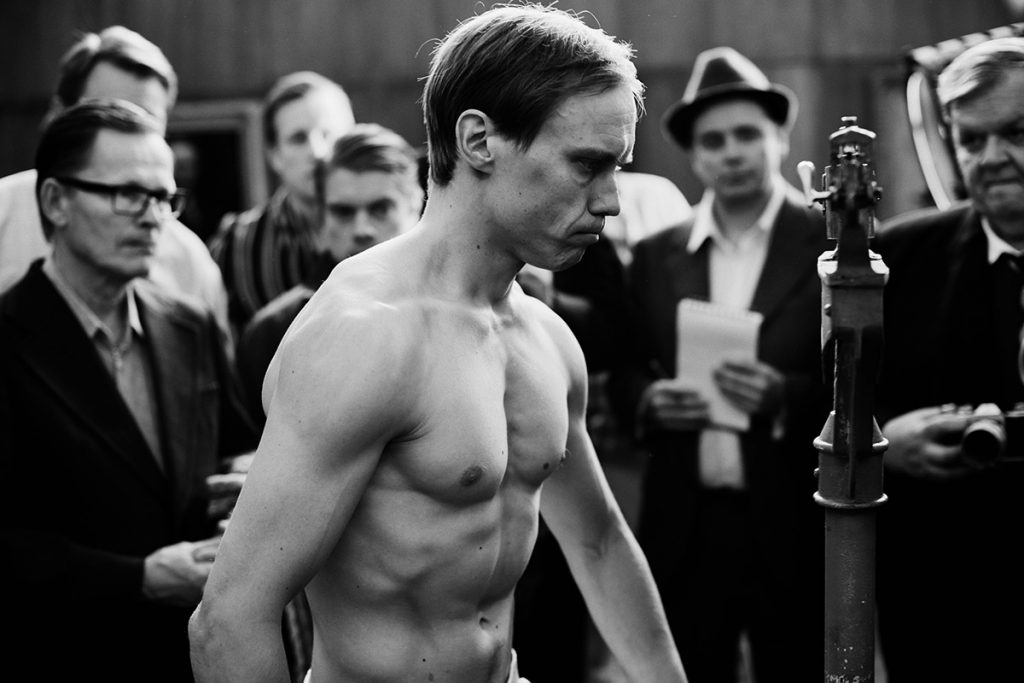 I had the honor myself of serving on the jury for this year's New Directors Competition, along with film producer Helen du Toit and cinematographer Patricio Castilla. We saw a roster of 15 films that featured debuts or sophomore efforts from exciting new talents, some of them having previously toured through CIFF with shorts in earlier years. The unanimous winner from my jury was "The Happiest Day in the Life of Olli Mäki," a burst of cinephilia joy from director Juho Kuosmanen, which might be one of the sweetest films you'll see in years. Set in 1960s Finland, filmed with digital cinematography and then given a brilliant black & white look (as if it were a film from 1963 digitally restored), Kuosmanen's first feature displays immense talent with the camera, not just in style but in using long takes that are energetic but never showy. The narrative told with such technology is no small feat either: a finely-tuned love story of a man who is being raised to become Finland's world champion boxer, but is starting to find a much more rewarding happiness in the time he spends with his girlfriend. "The Happiest Day in the Life of Olli Mäki" is one of those films that stays with you long after, using character, tone and heart for a walloping effect. It's also the type of festival title that could have competed in the main competition and likely won the big prize. ["The Happiest Day in the Life of Olli Mäki" screens one more time at on Thursday, October 27 at 5:30pm. To order your tickets, click here.]

Along with "The Happiest Day in the Life of Olli Maki," my New Directors Competition jury also gave a Silver Hugo to the German film "Fado" from debut director Jonas Rothlaender, a previous favorite talent of the fest. His movie, which displays the toxic characteristics of jealousy in a loving relationship, was not an easy pick due to its very sensitive focus (one that anyone could be actively ready to reject). But Rothlaender's ability to cinematically get us into the mind of a character without a shred of campiness was very impressive. For all of the films that flatly depict obsession or jealousy, "Fado" treats these common, intense feelings with more nuance than a mere monster movie. 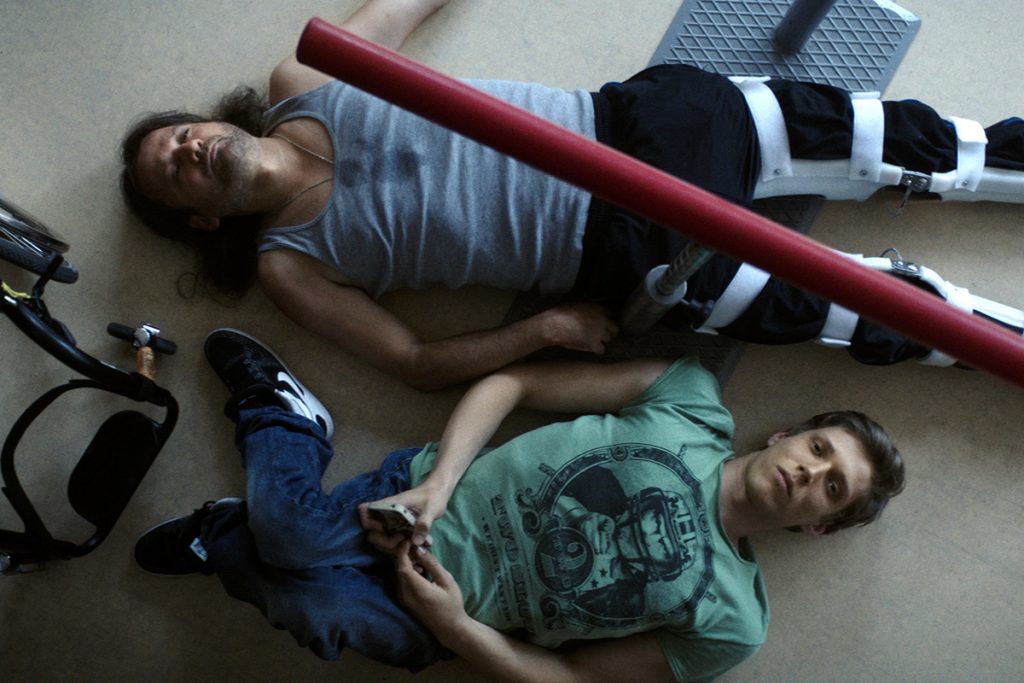 For the past three years, the New Directors Competition also includes a recipient for the Roger Ebert Award, which goes to a new filmmaker with a fresh vision who recognizes Roger's famous ideology about movies: they are a machine that generates empathy. That experience certainly came to my fellow jury members and myself when we saw "Kills on Wheels," a Hungarian aciton-comedy-thriller about wheelchair assassins, as played with a loving but non-special approach to characters rarely seen on the silver screen. Writer/director Atilla Till has made quite the genre treat for the audience that seeks it out, especially for those looking for storytelling that mixes Hollywood energy with a completely warming sense of empathy.

There were other highlights, of promising talent and new ideas, that particularly stuck out: "Amerika Square" comes together like a non-irritating version of Paul Haggis' "Crash," and displayed how Greek director Yannis Sarkaridis can succinctly express different characters—a facet that would particularly shine on a great TV show; Shahrbanoo Sabat's "Wolf and Sheep" is an unforgettable piece of atmosphere that presented an Afghan village lost in time, using a very confident approach to editing that resisted narrative or even knowing characters by name, forcing us to take in their world through gorgeous camera framing and unpredictable, very low-key events; "Alba," from Ecuadorian director Ana Christina Barragan, brings viewers into the perspective of a young girl navigating the traumas of a dying mother and trying to fit in with mean kids at school; Iranian director Adel Yaraghi's "Finals" creates high stakes out of a student resisting to take his life-deciding academic tests, and boasted some very simple but articulate camera usage, while also a screenwriting credit from the late Abbas Kiarostami that proved to be more essential to co-writer Yaraghi's film than one would hope. A personal favorite from this batch is "Mara'akame's Dream" from Mexican co-directors Federico Cecchetti and Tsikuri Temai, which takes a common story of the culture clash between old and new to vivid heights with cinematography and sense of location, showing how a father and rebellious son from a tradition Mexican village stick out when they travel to a loud and massive Mexico City.

Other winners of special note from other categories include: "Heartstone," an Icelandic drama about two young men's sexuality that received the Gold Q Hugo; the Gold Hugo-winning documentary "Samuel in the Clouds" and Andrei Konchalovsky's "Paradise," which received this year's Founder's Award from Michael Kutza. This doesn't even include the batch of enticing narrative and documentary shorts, or the Audience Award winner, the latter which is TBD as of publishing. But with this festival's emblematically strong lineup, the Chicagoan's majority favorite could be a film of any size.

For more information of the "Best of the Fest" lineup, click here. The Chicago International Film Festival runs from October 13-27. To read our complete coverage of the festival this year, click here.